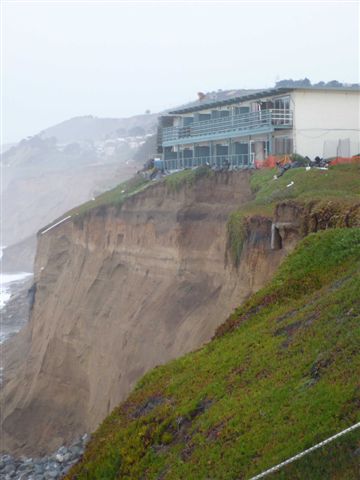 Crane on Esplanade swings over adjoining building with a load of boulders for the beach. 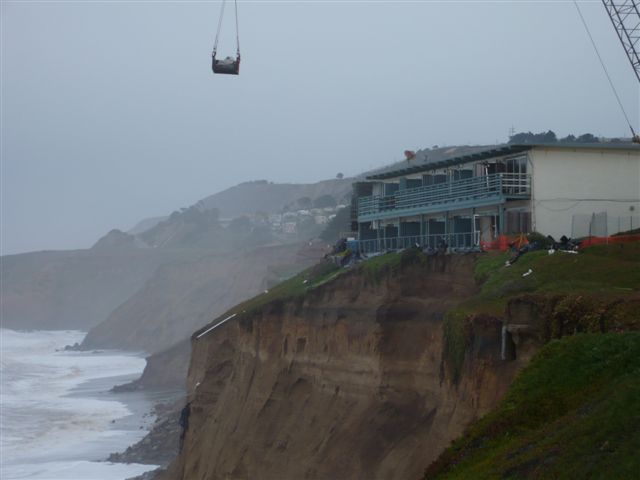 The crane swings out over the bluff. 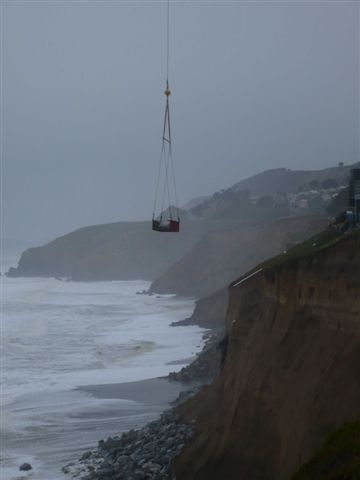 It starts its descent. 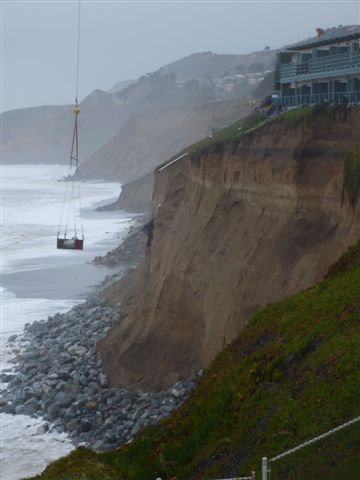 A bit farther down. 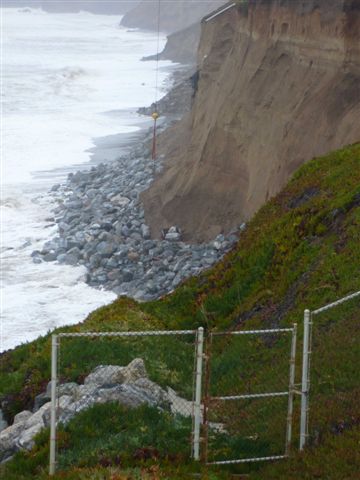 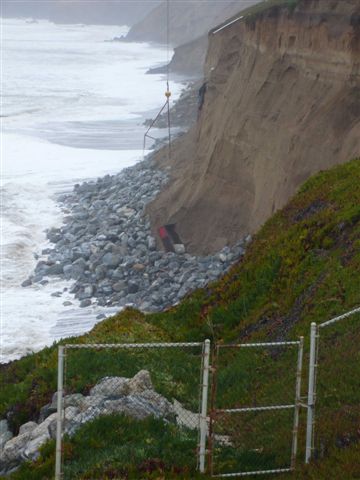 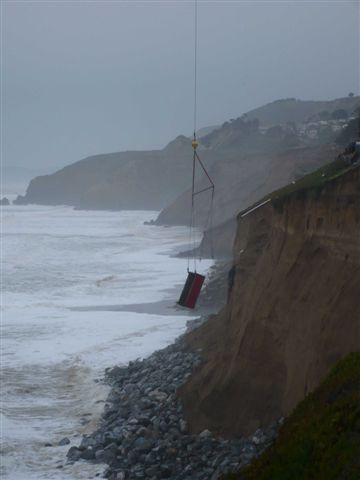 The empty container goes up for another load. 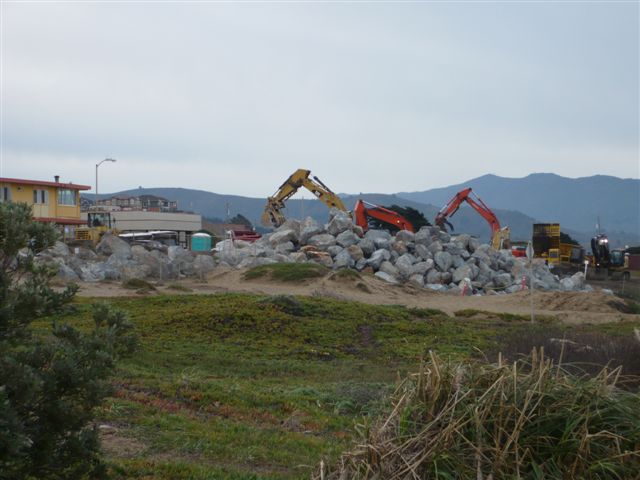 Meanwhile, toward the south of the disappearing Esplanade bluff, the fight goes on to shore up the coast near the Esplanade/Manor Drive intersection. 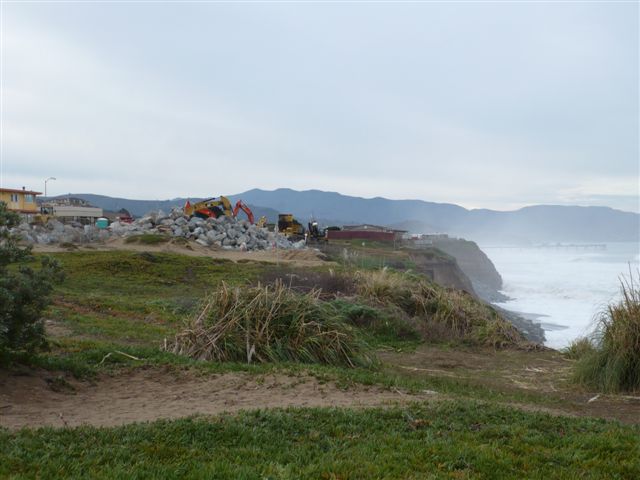 A longer view toward the south.

Does anyone think that the progress of the mighty Pacific Ocean will be impeded by such pebbles cast into the surf?

Thank you, Lionel, for such an excellent photo essay. Now that we don't have an imminent collapse and four helicopters in the area to cover this, you have given me a very clear idea of what is going on there.

I have to agree with Peter Loeb's points to a point. One of the problems with the cliff erosion is the development that was permitted over the years. As was shown with the erosion south of this building a few years ago, the natural drainage has been altered. The erosion is not just from the ocean but from the drainage out to the ocean.

I am not sure how viable these apartments will ever be now. It seems to me from a legal point of view (and admitting that I am not a lawyer) that full disclosure of the conditions would have to be provided to any prospective tenants and that this might drastically lower the amount of rent people would be willing to pay. The City of Pacifica may itself become liable if it allows tenants in when it has full knowledge of the precarious situation.

This is obviously an afterthought but perhaps we never should have allowed building on the coast.

With all the good will in the world, I doubt that we can save that particular apartment building for very long. The rip-rap might slow the ocean's consumption of the bottom, but the great sandstone face of the thing makes a mighty big target for the driving rains off the ocean. Sorry!

Get used to it. We are going to be armoring and/or diking the entire coast of the U.S.

That or let the ocean take it as it rises. Very possibly going to get scary in the next ten/fifteen years or so.

I'm not taking sides in a debate, I just want to point out some facts and principles.

1. Once you start placing rip-rap, you can't ever stop. You have to keep replacing the rocks, at the cost of hundreds of thousands of dollars every few years. This is true at Rockaway where I've lived for 35 years. If the rip-rap hadn't been regularly replaced, Nick's and the hotel would be long gone.

2. The cliffs and shoreline will always erode. The rate of cliff retreat may be slowed by rip-rap, but it won't be stopped. You can't beat Mother Nature, especially when it comes to the ocean. She is bigger, stronger, and lasts longer than us. She will always win. Sadly, all of Esplanade, Land's End, Dollar Radio, Shoreview will be gone eventually, perhaps not in my lifetime, but if you're young enough maybe in yours.

3. It comes down to a cost/benefit assessment: How much will it cost to protect a house or apartments or commercial building, and for how many years? What will be the return on investment? I don't know the answer. Property owners need to make their own determinations. The most difficult question to answer is whether we the taxpayers should pay to extend the useful life of those buildings, given that all of them, like us, have a finite life span.

Yeah, we should just let it go. Let 340 and 350 go, too. 310 and 320--we can remove the rock from there, they don't deserve the view, they're just common renters! And Land's End--they've got serious issues at their northern end, so we'll stop rocks because they won't help. And Joan's place, too--it's definitely heading for Dollar Radio, she's lost a lot. So no rocks for any of them--after all, it's such a beautiful 400-yard stretch of beach. Tourists come from all around to walk it.
While we're at it, let's remove all the riprap near the pier--remember, those houses wouldn't be there otherwise. The pier can go. And those homes on Shoreview and on 4th. The trailer park, of course, could go--those pebbles aren't helping there. The RV park--definitely.
The levee is just pebbles--let the mighty Pacific take lower Fairway district. Rockaway--let's see, Portofino could go, and the hotel. Those rocks haven't helped there at all.