Rolling Thunder: El Nino Is Back & He Is Pissed! 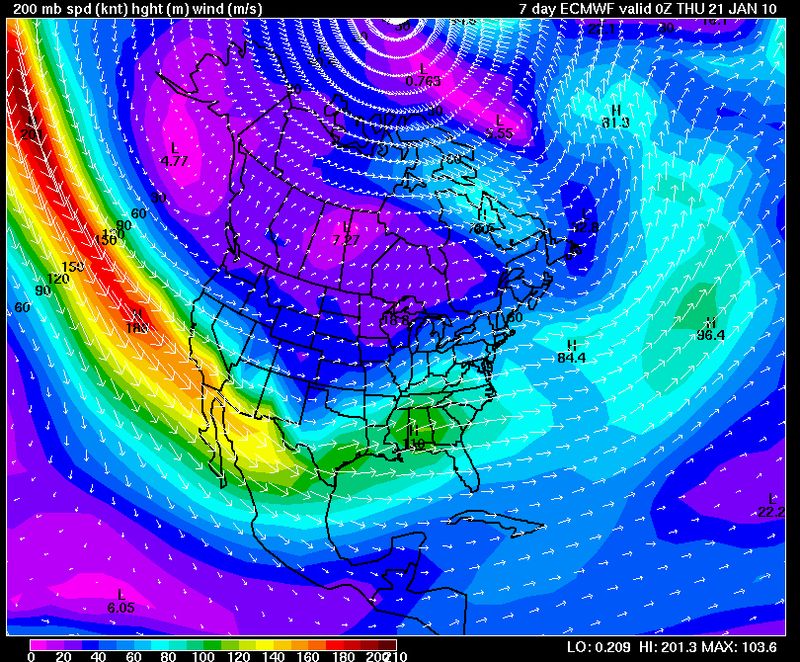 
Currently, the strong El Nino is reaching its peak in the Eastern Pacific, and now finally appears to be exerting an influence on our weather. The strong jet has been apparent for quite some time out over the open water, but the persistent block had prevented it from reaching the coast. Now that the block has dissolved completely, a 200+ kt [this means approximately 230 miles per hour] jet is barreling towards us. Multiple large and powerful storm systems are expected to slam into CA from the west and northwest over the coming two weeks, all riding this extremely powerful jet stream directly into the state.

The jet will itself provide tremendous dynamic lift, in addition to directing numerous disturbances right at the state and supplying them with an ample oceanic moisture source. The jet will be at quite a low latitude over much of the Pacific, so these storms will be quite cold, at least initially. Very heavy rainfall and strong to potentially very strong winds will impact the lower elevations beginning late Sunday and continuing through at least the following Sunday.. This will be the case for the entire state, from (and south of) the Mexican border all the way up to Oregon. Above 3000-4000 feet, precipitation will be all snow, and since temperatures will be unusually cold for a precipitation event of this magnitude, a truly prodigious amount of snowfall is likely to occur in the mountains, possibly measured in the tens of feet in the Sierra after it’s all said and done.

But there’s a big and rather threatening caveat to that (discussed below).Individual storm events are going to be hard to time for at least few more days, since this jet is just about as powerful as they come (on this planet, anyway). Between this Sunday and the following Sunday, I expect categorical statewide rainfall totals in excess of 3-4 inches. That is likely to be a huge underestimate for most areas. Much of NorCal is likely to see 5-10 inches in the lowlands, with 10-20 inches in orographically-favored areas. Most of SoCal will see 3-6 inches at lower elevations, with perhaps triple that amount in favored areas.

This is where things get even more interesting, though. The models are virtually unanimous in “reloading” the powerful jet stream and forming an additional persistent kink 2000-3000 miles to our southwest after next Sunday. This is a truly ominous pattern, because it implies the potential for a strong Pineapple-type connection to develop. Indeed, the 12z GFS now shows copious warm rains falling between days 12 and 16 across the entire state. Normally, such as scenario out beyond day seven would be dubious at best. Since the models are in such truly remarkable agreement, however, and because of the extremely high potential impact of such an event, it’s worth mentioning now. Since there will be a massive volume of freshly-fallen snow (even at relatively low elevations between 3000-5000 feet), even a moderately warm storm event would cause very serious flooding. This situation will have to monitored closely. Even if the tropical connection does not develop, expected rains in the coming 7-10 days will likely be sufficient to cause flooding in and of themselves (even in spite of dry antecedent conditions).

In addition to very heavy precipitation, powerful winds may result from very steep pressure gradients associated with the large and deep low pressure centers expect ed to begin approaching the coast by early next week. Though it’s not clear at the moment just how powerful these winds may be, there is certainly the potential for a widespread damaging wind event at some point, and the high Sierra peaks are likely to see gusts in the 100-200 mph range (since the 200kt jet at 200-300 mb will essentially run directly into the mountains at some point). The details of this will have to be hashed out as the event(s) draw closer.


In short, the next 2-3 weeks (at least) are likely to be more active across California than any other 2-3 week period in recent memory. The potential exists for a dangerous flood scenario to arise at some point during this interval, especially with the possibility of a heavy rain-on-snow event during late week 2. In some parts of Southern California, a whole season’s worth of rain could fall over the course of 5-10 days. This is likely to be a rather memorable event. Stay tuned. Here's a picture of what's coming: http://twitpic.com/y290d/full

I haven't finished my ark yet...