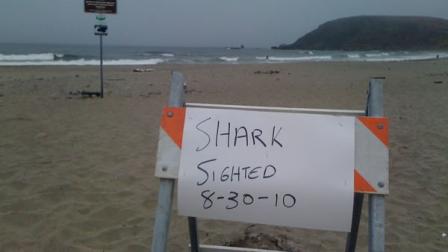 A large shark was seen attacking a sea lion Monday afternoon in the ocean about 150 yards off Linda Mar Beach in Pacifica, police said. Witnesses said it appeared to be a great white shark, 18 to 25 feet long. Shortly after noon, a surfer reported seeing the shark thrashing about with the sea lion in its mouth just outside the breakwater, said Capt. Fernando Realyvasquez, a police spokesman. Realyvasquez said it was the first local shark sighting in several years. Police posted signs on the beach alerting the public and suggesting caution before entering the water. (E-mail Bob Egelko at begelko@sfchronicle.com.)

Finally, a tourist attraction! Come to Pacifica and feed the shark.