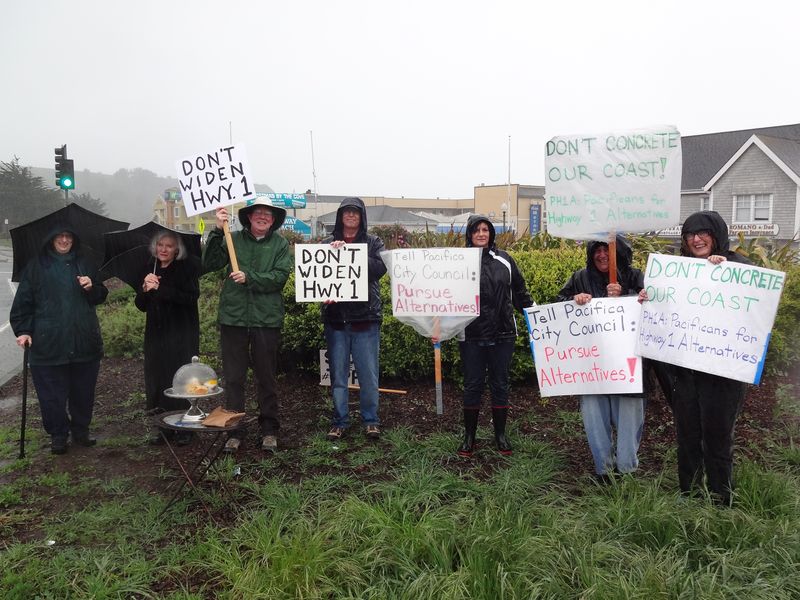 “To the Pacifica City Council: The Caltrans plan to widen Highway 1 is not good for Pacifica. It will cause more problems than it will solve. I support pursuing a combination of alternatives that can improve traffic congestion on Highway 1 and that will be less damaging to Pacifica.”

PH1A opposes the current Caltrans plan for a number of reasons: It is vague and does not address the need for safe pedestrian crossings. It does not have good bicycle lanes. It calls for huge retaining walls and does not rule out the possibility of sound walls blocking coastal views. In short, it would destroy some of Pacifica’s unique natural scenery and quality of life.

Moreover, the plan seems destined not to reduce traffic in the long range but to increase it, since four lanes would go to six lanes and then back to four – permanent bottlenecks on either end. Increased traffic during years of construction would generate more congestion, as well as air and noise pollution. Most likely, it would never lead to shortened traffic jams after that multiyear process.

PH1A has been organizing for more than a year to get Pacifica City Council to hold public hearings on Caltrans' plan. So far the city has not acted, and the plan is moving forward, with Caltrans taking the lead. PH1A also wants council to hire a traffic consultant to investigate best alternatives for Pacifica.

PH1A has suggested synchronization of traffic lights, more resources for school carpooling and shuttle buses, better public transportation, and other alternatives for pedestrians and bicycles, which are more likely to reduce traffic and be less invasive and disruptive for Pacificans and other coastsiders who use Highway 1.

Volunteer or get information: ph1a@gmail.com

Posted at 11:44 AM in Transportation | Permalink

I have only admiration for those who stayed long enough to be in this photo. I was soaked to the bone when I arrived due to other outdoor work earlier. I notice that some other people who were there when I was aren't in this picture. Thank you, all, for showing up in this weather; and thank you, Lovey's, for the tray of wonderful sustenance. What fun foods they were.

I just signed the petition!
http://ph1a-pacifica.weebly.com/want-to-help.html

The last thing we need is tons of Caltrans construction in our town - *forever* - if we are to look at Caltrans' failure to build a safe Bay Bridge; other Caltrans projects are poorly planned/executed and not needed or not wanted by the communities where they are located.

The rally will go on, rain or shine! Give us a honk if you're driving by.