Pacifica City Council: When a Deficit Is Not a Deficit 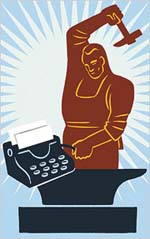 By "Ape Shall Not Kill Ape"

At the October 13, 2014 Pacifica City Council meeting, Mayor Nihart took a moment to wag her finger and lecture the citizens of Pacifica on their oh-so-silly notions about this city’s so-called $4 million deficit.

Apparently, there is no such deficit and she’d really appreciate it if everyone would just stop being troublesome troublemakers who are only demonstrating their ignorance by constantly harping about this teensy little pile of disappeared money.

Besides, it’s probably around here somewhere in a drawer, a shoebox, or a dirty sock. We’ve got a guy—sorry, a consultant—poking one of those metal detector wand things around the office. Only $25K to hire this guy. Found him on Craigslist—a real steal. Oops, heh, sorry.

Anyhoo, the point is that we’re pretty sure we’ll find the missing money, which really has noooothing to do with our budget anyway, so everyone can just shut up and settle the hell down!
__________

Nihart: City Manager, I’ve heard this enough. I’m…I’m done with it. There is no $4 million deficit.

Nihart: And those funds are funds that are grant funded. They’re special funds, they’re other kinds of earmarked funds that have nothing to do with our budget, our balanced budget, or any of those kinds of things.

Nihart: —and so when, for example, you get money from C/CAG to build something and you maybe spent more of that than you thought you did and…that’s what you’re tracking down.

Nihart: Thank you. And for anybody who’s confused about that, city manager has gone through it with all of the candidates, so they should be well aware.
________

The City’s full budget includes more than just the General Fund, even though that is the topic that often gets the most attention and for good reason. However, there are a number of other funds that make up the City’s full financial picture and that are important to understanding the City’s overall financial status.

Fortunately, remedying the approximately $4 million total deficit shown across several funds is a problem that isn't required to be fixed overnight.

Over the course of several years, we can bring these funds into balance on an installment plan with several possible revenue sources such as the following:

 Assigning a portion of General Fund balance revenues toward the amounts;

 Using one-time revenues such as the proceeds from the sale of the Beach Blvd. property;

An outcome of this approach is that some planned activities over the next few years will be delayed or possibly eliminated. I will return to Council in the first quarter of Fiscal Year 2014-15 with a preliminary plan to fix the deficits based on information collected between now and then including a “second opinion” by a financial services professional to confirm or modify these results.

Big Banker is from a better place and time.

I was asking who was speaking when Mary Ann Nihart started talking about the "unaccounted for" $4 million.

I think Chris Porter was mentioning that Roger Meddler was talking to City Council.

I think we just got our wires crossed a bit.

Chris can clarify if she wants. But I don't think she was implying that Roger was Big Banker.

Chris, good guess, but per Riptide policy, I can neither confirm nor deny. Big Banker is definitely known to us, but that's all I can say.

"These are not the droids you're looking for."

Who was talking at the podium right before Mary Ann went off?

"The idea that ... that these funds need be refunded only with general fund money over a course of years without the person(s) responsible for these dedicated funds being at minimum exposed, is frightening."

This is public money.

"Creative" financing is not acceptable.

How is it the City of Pacifica, with a $45+ million budget, is riding blind, without a financial professional on staff.

The bank would not accept it, and Pacifica residents -- who are on the hook for debt whether the city is incorporated or not -- should not accept what amounts to incompetent fiscal management.

Let's hope the new city manager doesn't get too cozy with anyone who would ask otherwise.

Madam Mayor clearly shows part of the reason we are in so much trouble as a city -- finance was ignored for the past seven years.
Other cities don't have such faith-based departments with no CPAs or even anyone qualified to run a municipal finance department.

I rather doubt the new city manager had any idea what she was getting herself into with this job -- attempting to manage the "City of Smoke & Mirrors."

Try explaining being overdrawn down at the bank this way.

It's not a deficit, it's just that I don't know where all my money went!

No matter where or what funds have been overspent or are deficient in funds, they should still have SOMEONE who spent, misplaced, or mishandled those funds. The idea that our new city manager and our old mayor would think it a mere trifle, or worse, that these funds need be refunded only with general fund money over a course of years without the person(s) responsible for these dedicated funds being at minimum exposed, is frightening. Tinfow and Nihart are both publicly funded, and it is clear that the public, in the minds of Tinfow and Nihart, needs to just shut up and pay up.

The last time I witnessed this sort of naked contempt for the public was when I lived in Washington, D.C. I managed a scene shop that used the same air freight service as the CIA and Quantico. We would ship off backdrops to Disney on Ice all over the U.S. One fine day as we loaded our shipment into the pickup van, I noticed a package headed to Beijing, China from the Marines at Quantico. They were air-freighting barbells overseas. The driver made a joke that the barbells were probably made in China in the first place.

Publicly employed management has no sense of right from wrong regarding public funds. Mary Ann and her new best friend underscore this truth a little too well.

I'm trying my best to see things from the Mayor's point of view, but I don't understand it.

There's a $4 million deficit that Lori Tinfow outlined in her report to council when the budget was presented a few months ago. The city manager clearly calls it a "deficit" in that report and the $4 million number is one that she supplies as well. It is the sum total of a number of deficits affecting a number of funds, and she details them all.

Is it Nihart's contention that it isn't a deficit unless it's from the General Fund (Fund 01)? A lot of funds make up the entirety of the city budget, not just the General Fund. If the XYZ Fund is in the red, we still have to fill in that gap in funding somehow, right?

What am I missing here?

There is an additional $1.5 million that has gone missing. The Beach Boulevard property was refinanced and $2 million was taken out of the proceeds to cover a $500,000 obligation, and set aside $1.5 million for the Palmetto streetscape. Council directed that this action be taken and staff said it would be done, but when it was time to fund the streetscape project, no dedicated funds could be found. Mary Ann's attempt to minimize the city's troubled finances reflects badly on her.

$4 million missing from any city fund is a big deal. The loss of a $6 million loan to the R.D.A. is a bigger deal.

Our councils past & present have spent most of their energy trying to raise revenues (taxes) but little or no time understanding where the money they have is really going.

Yeah, it's too bad -- I just have a real lack of trust after so many years of the dance of the million veils.

After the games Nihart has been playing, promoting a "cell phone" tax without public review, not having public forums on the proposed widening of Highway 1 when requested during the EIR process, with Len Stone reengineering the Open Space and GGNRA Liaison Committees so they are smaller, have less functionality, etc.

It's not clear what to believe from City Hall about fiscal issues.

Hire a finance professional with a good track record, don't run the city's finances ad hoc with consultants every 7 years, whether you need them or not.