County alert: The southern end of Mirada Road in Miramar (north of Half Moon Bay) is closed due to erosion of the roadway by high surf. Repairs have been approved. Use caution in the area, which is home to Miramar Beach House, Bach Dancing & Dynamite Society jazz venue, and the coastal trail.

Some College Graduates Think Judge Judy Is on the Supreme Court

@CNNPolitics: Nearly 10 percent of college graduates surveyed in a poll believe that Judith Sheindlin, aka "Judge Judy," serves on the U.S. Supreme Court. 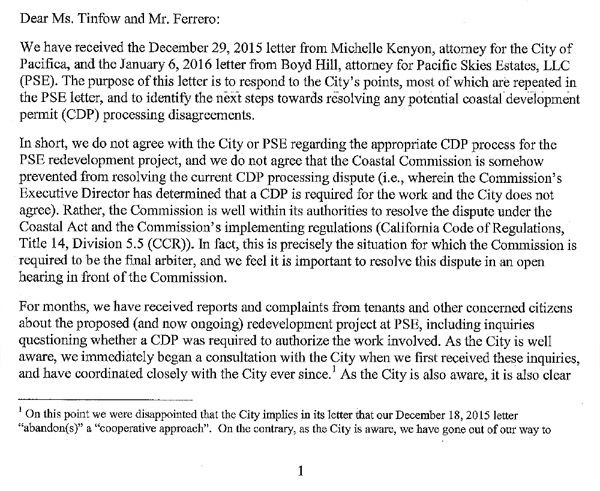 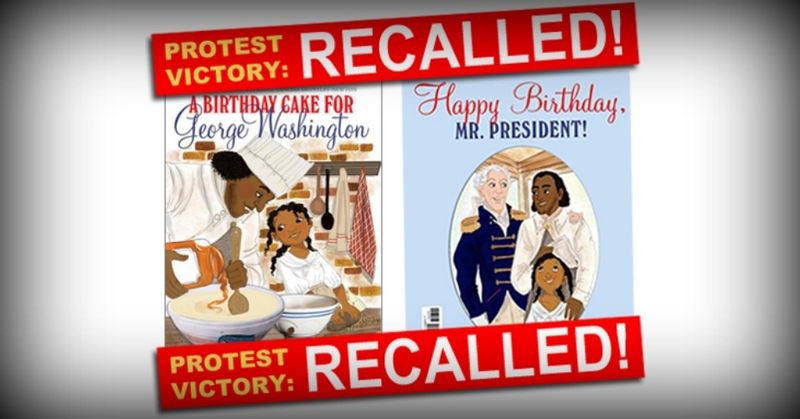 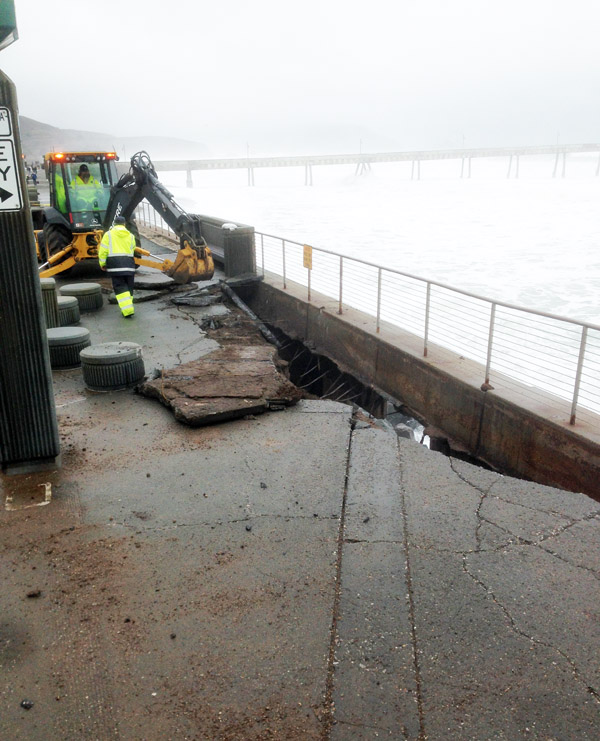 Shortly after 4 a.m. on January 17, a large chunk of Beach Boulevard seawall and sidewalk fell into the ocean. Repair requires an emergency Coastal Commission permit, expected to go in front of the Planning Commission on January 19. Meanwhile, city crews have dumped boulders on the beach to prevent further damage to the Sharp Park promenade. (Photo courtesy Marc Smith/Pacifica via Pacifica.city) 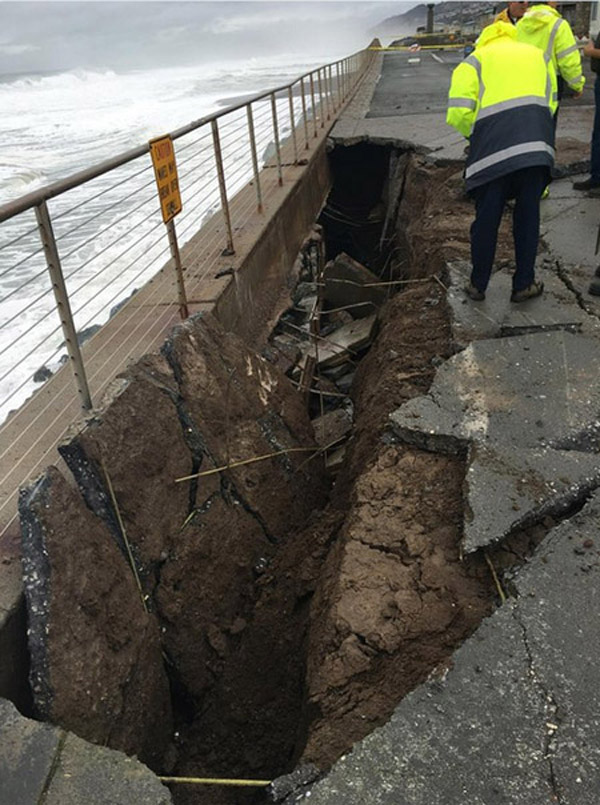 Check Out This Online Record Collection

Take a Break from Shoveling Snow 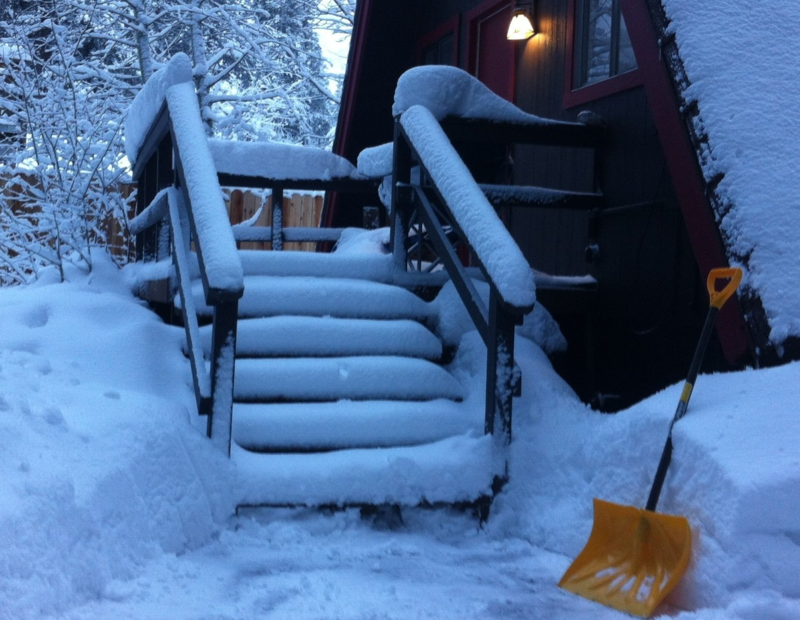 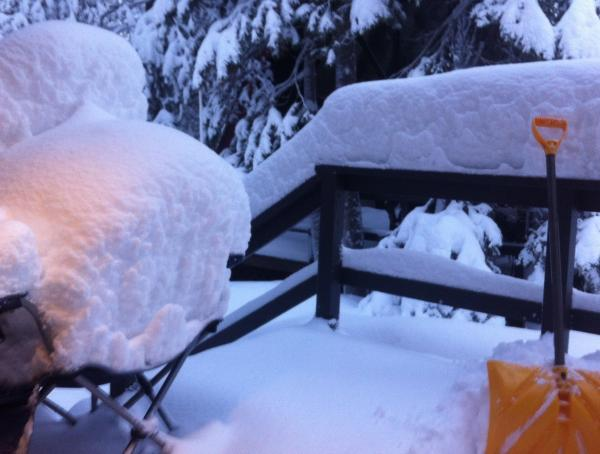 Disharmony on the Hill

Better Business Burro says, "It looks like the first Mechanic's Lien was filed back on December 17, 2015. Mountain Cascade (http://mountaincascade.com) recorded a mechanic's lien for nonpayment of $259,038.36 for the complete sewer system and storm drains." 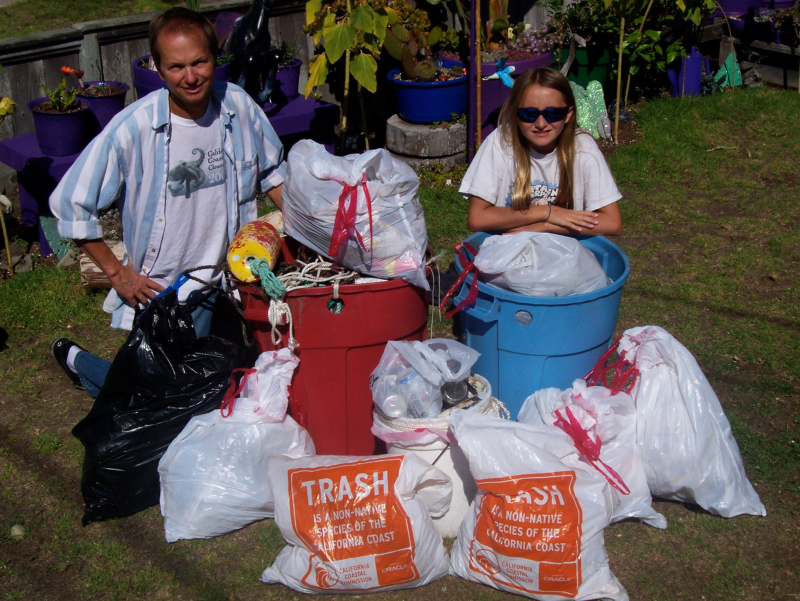 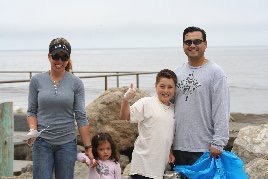 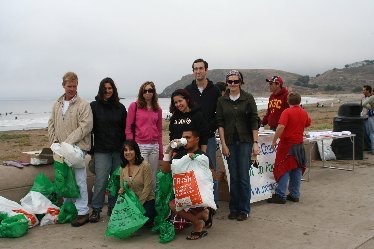 Pacifica City Council met January 11 to give a pay raise to City Manager Lorie D. Tinfow. In this new addendum to the contract, she receives a 3 percent salary increase in 2016 to $213,996; 24 days of paid vacation leave; 96 hours of paid administrative leave; 11 paid holidays; two "floating" holidays; and deferred compensation of $5,000 paid annually in October. (The reason for this was not put forth.)

It would be business as usual, I suppose, were it not for the fact, by this city manager's own admission, that $4.75 million is missing from special funds in the city budget. In other cities, such as San Francisco, they exhibit more curiosity about these sorts of things. In Pacifica, we still haven't even initiated a forensic audit to find out what happened to all of this money. In fact, this city manager has made the absurd statement that these missing monies are "loans." What sort of "loan" is made to unknown parties, with no idea where the money is going, and when it will be recovered?

EDITOR'S NOTE: As Lionel Emde notes above, Pacifica City Council took up the issue of City Manager Lorie D. Tinfow’s proposed raise and benefits package at its January 11 meeting (and subsequently voted for the raise around midnight, after most protesters had left the building). This agenda item was postponed from the Saturday morning meeting December 19 at which only seven members of the public appeared, all of them opposing the city manager’s raise and criticizing the city's last-minute scheduling of this important agenda item during a holiday weekend. Please be sure to read the comments below this post and join the conversation thread. And if you like to do your own research, visit the website of Transparent California for interesting numbers on what local, county, and state officials make. Politicians may lie, but numbers don't.

Here is a disturbing 2013 report on a sex abuse case involving the City of Walnut Creek when Lorie D. Tinfow was assistant city manager there. Click the link below to see the results of the investigation (courtesy of Pacifica.city). 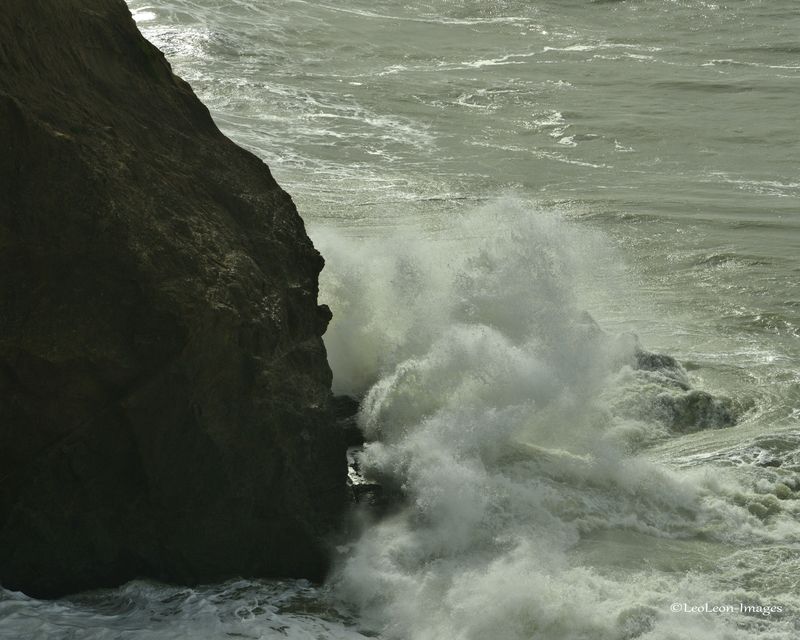 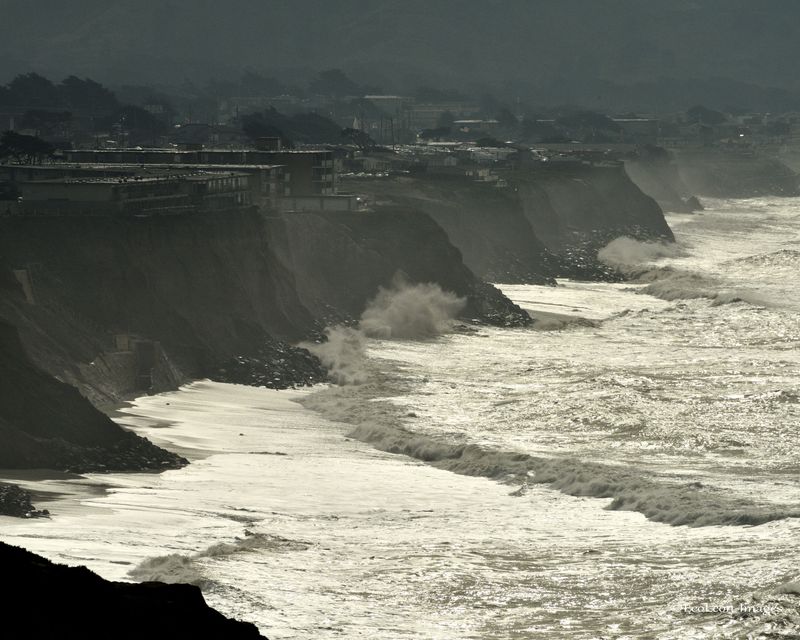 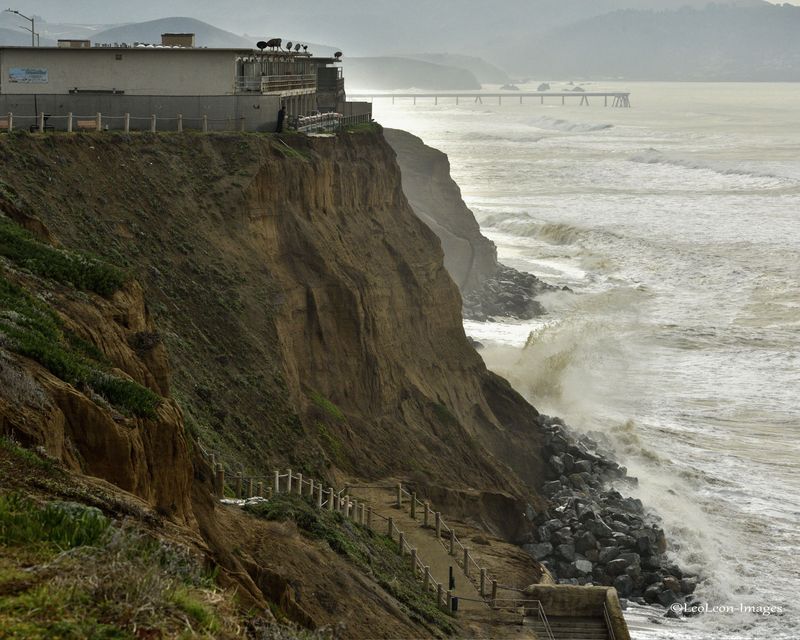 Living on the Edge in Pacifica (Leo Leon photos)

If you hike or bike in San Pedro Valley Park to enjoy its flora and fauna, and you want to help maintain the park's five trails and wildlife habitat, drop by the visitor center and join the volunteer team called Friends of San Pedro Valley Park. Several times a year, scientific experts present educational programs at the visitor center and guided hikes focusing on park wildlife, geology, and botany.

California Dreamin' on Such a Winter's Day 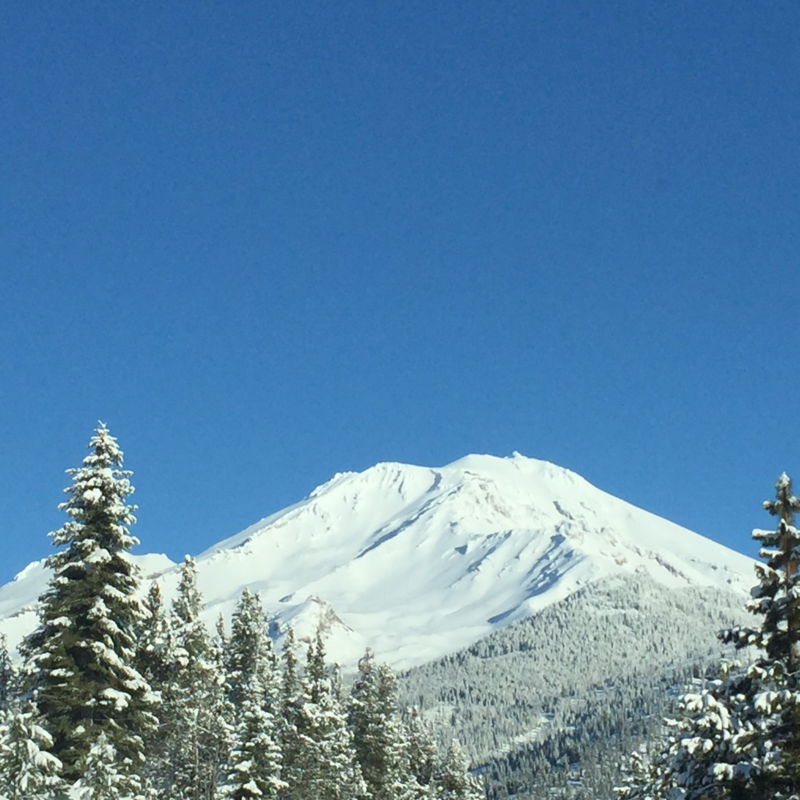 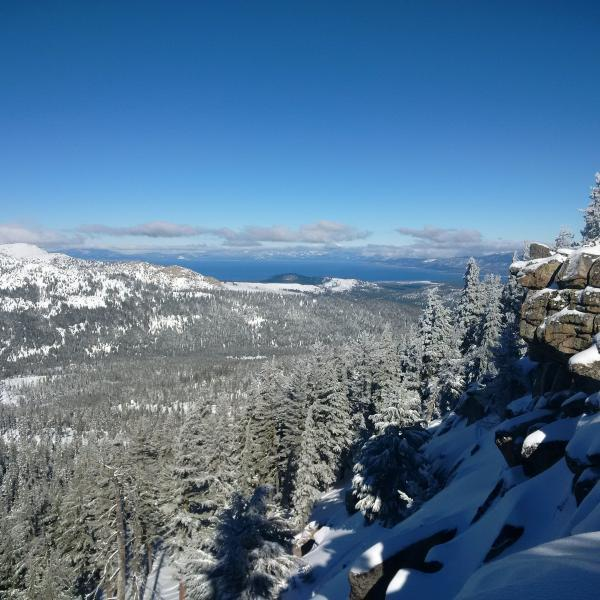 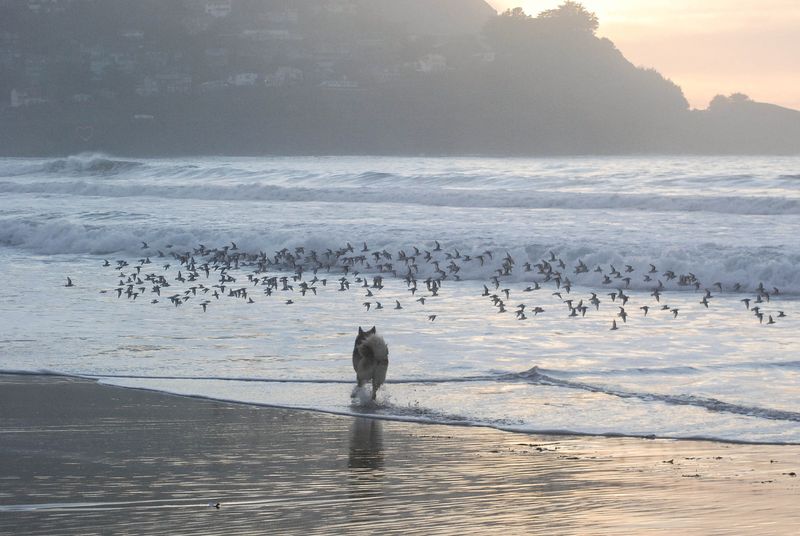 Sanderlings pictured at Pacifica State Beach (above) have just arrived from the Arctic tundra, where they breed during the summer. Desperately tired and hungry after their 2,000-mile journey, they settle on the sand and follow the waves in and out, digging for sand crabs that make up most of their diet. Any off-leash dog chasing them relentlessly, as did this husky mix on a recent Friday afternoon, cuts down on their chances for survival. To help reverse the serious decline in shorebird populations, we humans can extend our seasonal goodwill to all species sharing the beach with us and let them rest and feed in peace.

Previous Next
Blog powered by Typepad
Member since 03/2007