« The Quarry That Would Not Die | Main | Rockaway Quarry Owner Information » 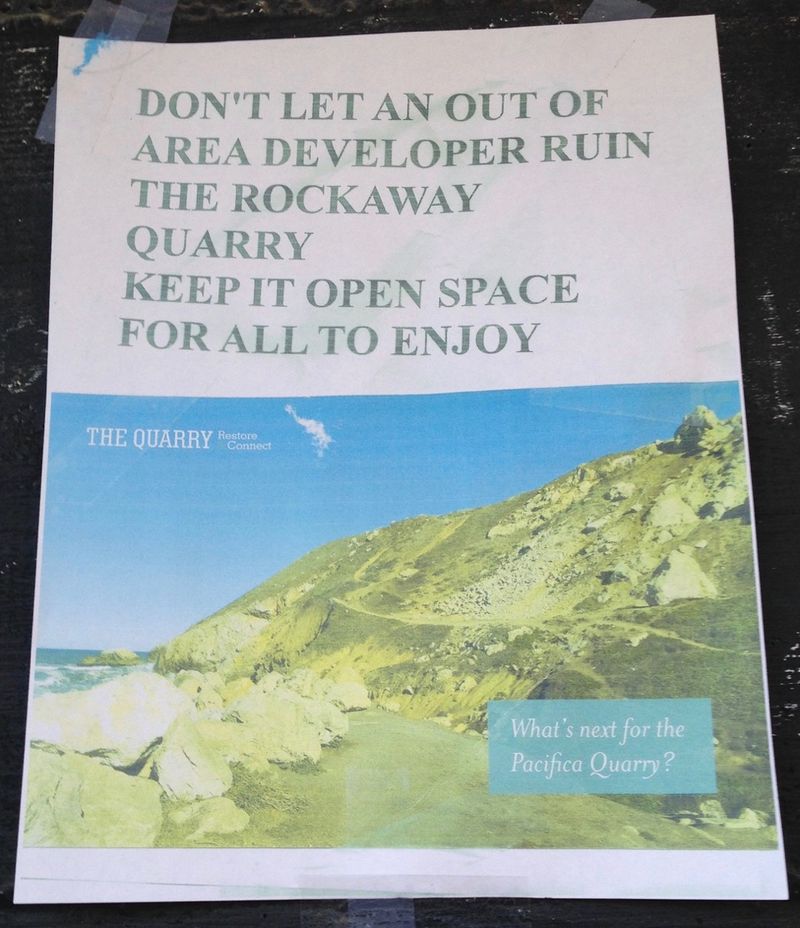 Poster on Rockaway Beach kiosk. Meanwhile, at various locations around Pacifica, several uninformed, out-of-town "volunteers" are circulating petitions favoring quarry development, as locals challenge their facts and tactics. (Please see and comment on our related quarry stories. Also, head over to Pacifica.city to see "Fact-Checking the New Quarry Website," April 27. It's an eye-opening list of Eenhoorn housing projects around the country.)

Posted at 11:47 AM in Planning & Development | Permalink

OH BOY! I just got a robo call from the same well-funded signature gatherers who sent me that very exclusive packet yesterday. Kind of reminded me of those fake IRS robo calls we've all been getting demanding money from us -- or else.

There are so many false statements in the mailer that it is misleading to the public.

BOTTOM LINE: Voters will lose the right forever to vote on housing in the quarry. That's what the initiative says -- that and a whole lot more.
http://www.pacificariptide.com/pacifica_riptide/2016/04/quarry-owner-files-ballot-initiative.html

We will get Daly City by the Shore.

Is that the same as Carmel by the Sea?

"I know that if the quarry owners flip the property, they will double or triple their investment."

Dude, if they were to get the housing entitlement, which I doubt they will get, it's worth tens if not hundreds of times what they paid for it. And does this Michigan-based firm actually own the property, or is it fronting for others, as Peebles did?

Just thought it was an important omission.

big banker: I know who Jerry Trecroci is. I don't know what your point is that I failed to mention him.

When the ballot initiative fails, do you think they can still see a 2x-3x return? I don't. I think they'll be lucky to break even, unless they can find another sucker.

If they can flip for that markup -- they'd be smart to do it now.

"Mike ... gives back without praise or fanfare."

Mr. Mooney's done more than enough for the community by lending his name to the developer, who we see is just like all the other developers, sending fancy mailers with 100% OPPOSITE INFORMATION AS TO WHAT THEY INTEND.

You don't think he wrote the ballot measure, do you? DO you?

---------------------
ON THE MAILER:
"Pacifica Residents for Preserving the Quarry."
FALSE: Implies many grassroots supporters of the quarry.
WHAT IT REALLY IS: Two residents, Mike Mooney and Gerald Trecroci, sent in the ballot initiative to City Hall.

Are they getting a piece of the action? Or did they do this out of the sheer goodness of their hearts?

--------
"We deserve to have our voices heard regarding ANY development at the quarry."
FALSE: Implies voters do not have a say.
WHAT IT REALLY IS: Voters do have a say on whether there should be housing in the quarry. We've got that now. This ballot initiative would remove that right, forever.

--------
"Sign the petition today – ensure Pacifica voters have final say on the latest Quarry development proposal."
FALSE: The initiative signs away all voter rights to whether there is housing in the quarry, and changes zoning in part to commercial.
WHAT IT REALLY IS: A property entitlement to build housing in the quarry, and remove the public voice forever re housing units in the quarry. Property value would increase by a factor of 10 or more overnight if the ballot initiative, written by and for the developer, passes.

--------
“This ballot measure initiative gives voters a permanent say about the future of the Quarry – not just a few elected officials and developers.”
FALSE: The voters have a say right now as to whether to put houses in the quarry.
WHAT IT REALLY IS: This ballot initiative REMOVES FOREVER the public's right to vote on housing in the quarry.

--------
"Ballot Measure Goal: Limit development on the Quarry site."
FALSE: The ballot initiative asks for everything plus 206 kitchen sinks.
WHAT IT REALLY IS: Are ya ready for this one? It locks the voter out forever on whether to put housing in the quarry. The quarry is zoned commercial now -- no voter approval is needed to put in a hotel. The developer needs only voter approval to put housing units in, and if he has that, he can sell the property for 10 times what he bought it for.

Take a quick profit, and let the next guy build it!

I know that if the quarry owners flip the property, they will double or triple their investment.

Have a good evening.

Given the deceptive practices Eenhoorn is displaying with its disinformation campaign, are you convinced that Mr. Mooney understood the implications of what he was signing? If you just believe the marketing spin by this millionaire absentee landlord (I am NOT calling him a Rust Belt Slumlord; that's just something I overheard), this rezoning initiative is an ecological imperative.

You both fail to mention that in the package (I am going by what I am told; I am out of town today), Gerald "Jerry" Trecroci is the guy who signed the petition with Mike Mooney.

The POB to send the material back to is:

Mike is a fine member of the community who gives back without praise or fanfare.

Jerry I only met once, so I can't say anything.

I just got the mailer. The outside of the envelope says Pacifica Residents for Preserving the Quarry. Inside are two copies of the initiative petition with instructions to fill out and mail back in the postage-paid envelope. The slick brochure makes the following statements:

•"We deserve to have our voices heard regarding ANY development at the quarry."

•“This ballot measure initiative gives voters a permanent say about the future of the Quarry – not just a few elected officials and developers.”

Oh goody, goody. I received a very expensive mailer today containing a copy of the petition for me to sign and a self-addressed return envelope to a post office box. Now that it's public knowledge, a property management company from Michigan, started with daddy money like Trump's career, is the owner of the quarry and is again spending big money to buy signatures. What have we learned? To loosely quote P.T. Barnum, "There is a sucker born every minute."

Man, just donate the property for 4X the purchase price in tax write-offs already. I doubt Pacifica votes to create a new neighborhood in the quarry just so little Eenhoorn can show daddy how smart he is. Michigan, give it up.

The group that purchased the quarry is an apartment builder and management company. It would make sense that it sell off the housing and hotel pads to companies that develop those types of properties.

As the narrow-minded people in Pacifica fight over the quarry once again, the city infrastructure continues to deteriorate.

Maybe property owners in Rockaway should look at it this way: Property values in Rockaway will continue to go up once the Holiday Inn Express gets built and when, if, anything ever gets built in the quarry.

The problem is, the developer rushed to get this on the ballot without completely studying the problems that made the Trammell Crow and Peebles proposals fail. Housing is the downfall of the quarry.

Thanks for posting info about http://thepacificaquarry.org/

Hopefully some of the backhoe story will out.

Great find, John, I was unfamiliar with that one!

"Our on line research quickly shows that Eenhorne is little more than an apartment management outfit. They do not own or operate hotels or retail outlets, they run apartment complexes. Below is his bio, cribbed from the Eenhorne webpage. From the bio, I am sure he is very good at making money from apartment complexes, and he certainly should continue to do that – in Detroit or maybe Flint."

Enjoy this: http://thepacificaquarry.org. After being accosted by the faux grassroots people pushing the rezoning petition, I started doing some research into Eenhoorn and Mr. Huele. Just a quick pass reflects that these folks are not being forthright with our community. "Out of towner" is not a big deal for me, but "shady out of towner" sure is.

"It recently got a $6 million loan from the county to build a library."

That's true, and it was given because the HMB library serves unincorporated communities that are county-governed. We have no such thing in Pacifica, therefore, it's all on local taxpayers to pay for it, not the county.

"We have our neighbor city Half Moon Bay with a world-famous hotel."

That's also true, and it was a years-long struggle with lots of local opposition there before the place finally was approved and built.

We have quite enough people and the traffic that accompanies them right now, thank you.

I am not sure why every small or big development always should be challenged in Pacifica. We have our neighbor city Half Moon Bay with a world-famous hotel. It recently got a $6 million loan from the county to build a library. No developer or individual will invest in any property if there is no profit. Of course, they need to make a profit. It is a win-win situation and it does not matter if it is out of state or in state. Aren't our neighbor cities subject to California coastal codes? OR is it just difficult for us?

"When Arnold "The Terminator" was governor, he left California near bankruptcy. When Jerry Brown came in, he had to perform swift and harsh cuts to get the state back to solvency."

Ah, and so now -- as I suspected -- you have been giving readers a peek behind the curtain, into to the Wonderful Land of Spin, aka Make-Believe, aka Narnia.

The California Coastal Commission's budget stayed steady throughout Schwarzenegger's terms and began to increase when Brown retook office. Here, have a look at the budgets and look for yourself: http://www.dof.ca.gov/budget/historical/ (the GL for the Commission is 3720)

So, really, when the facts are laid upon the table, the Coastal Commission was never in any danger of being "eliminated," nor does it find itself in any current danger of being "dissolved," as you put it.

City Council has to stop spending money it doesn't have.

What does it think, that we're a bank?

When Arnold "The Terminator" was governor, he left California near bankruptcy. When Jerry Brown came in, he had to perform swift and harsh cuts to get the state back to solvency.

"Who in Pacifica has the knowledge and money to build out the quarry?"

It doesn't need to be built out; leave it alone.