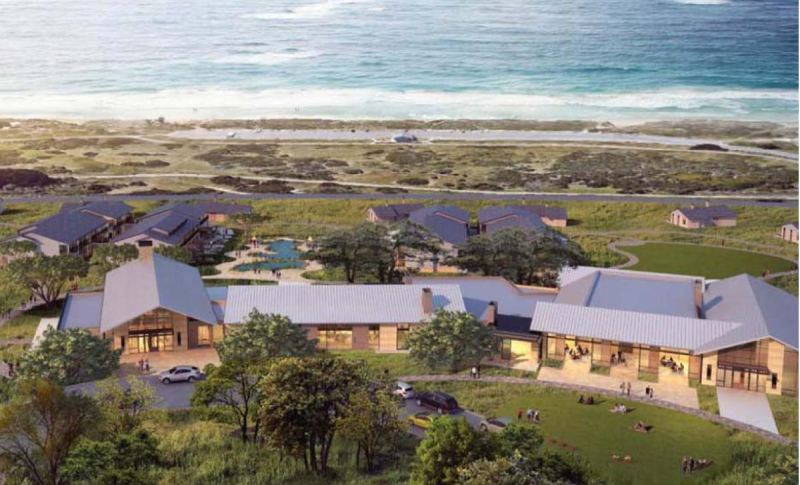 Posted at 04:08 AM in Planning & Development | Permalink

Many Half Moon Bay residents are strongly opposed to a proposed 48-acre resort adjacent to Dunes Beach.

Known as the Dunes at Half Moon Bay, the proposal includes a 212-room luxury hotel and spa, 15,060-square-foot conference center, hostel comprised of 10 cabins and 40 beds, parking garage and RV park and campground with 177 spaces.

Currently used for agricultural purposes, the site is between the ocean and Highway 1 and is bisected by Young Avenue.

The project site is divided into 206 legal parcels, most of which are owned by applicants Steven Weed and John Vidovich of Surf Beach Partners, LP/V.G. Investments in Los Altos. The applicants are also requesting the council amend its local coastal program to accommodate the project.

During a City Council meeting May 5, nearly 20 residents lambasted the proposal, and not for the first time. Organized opposition outfitted with matching shirts and signs have showed up to past council meetings to make their positions known to the city.

Critics of the proposal say it will ruin precious scenic views and sensitive habitats as well as exacerbate traffic problems, among other impacts.

“The Dunes project is simply too much. Its location, its impact on the beach, environment, traffic flow and viewscapes is grossly inappropriate,” said resident Kristy Koberna during the public comment portion of the meeting. “No amount of hotel occupancy tax can offset the disruption.”

“We the citizens of Half Moon Bay, the taxpayers, the community that chose to live here because of Half Moon Bay’s rural nature, farmland and open space see the Dunes Surf Beach hotel and RV park as a direct threat to our way of life,” said resident Beth Pielert. “This project will open the door to more paving over of wild lands and farmlands.”

Many speakers during the meeting called on city officials to reject the proposal and not even allow the entitlement process to proceed.

Criticism of the project is by no means limited to council meetings. A long list of emails from opponents of the project — the list doesn’t include a single supporter — has been posted to the city’s website.

Last year, nonprofit Green Foothills circulated a petition against the development and amassed 4,680 signatures, with 1,880 coming from Half Moon Bay residents, according to the nonprofit. And a large sign declaring opposition to the proposal hangs on a fence along Highway 1.

HKS Architects, which designed the project, said on its website it used a “light touch approach to create an eco-friendly, low-scale resort at the environmentally sensitive site.” According to the application, the proposed development offers a variety of low- and high-cost accommodations.

“A fundamental principle is to ensure access opportunities to coastal visitors with a range of income/financial capacity,” the application states.

Project plans were submitted to the city in September 2019. Before the project could move on to the environmental review phase, the COVID-19 outbreak happened, so the entitlement process is currently on hold.

The next step will be for the council to consider approval of a contract with an outside firm to complete an environmental impact report. Approval of the project is ultimately up to the council.

There will be numerous opportunities for the public to comment on the proposed project in future council and Planning Commission meetings, though the next meeting date has not yet been announced.

“Our intent is to keep our community involved, we know how much they care about this project and we’re making every effort to have information available to them,” said Community Development Director Jill Ekas.