Alan Wald reports that the owner of the Chevron station at Milagra & Oceana is furious about RVs parked on Oceana across from the city's corporation yard. Pacifica palindrome lovers say:
"No RV, eh, Chevron?"

How does a palindrome-loving cow communicate with its herd in 2020?
"Moo! Zoom."
Unless, of course, it has achieved herd immunity.
Alan Wald
Riptide's Resident Palindromist

When Riptide roving reporter and palindromist Alan Wald heard that SamTrans is rolling out a rugged new electric bus, Alan wondered if Subaru would manufacture the bus and call it the SUBARU DURA-BUS.

When he read in the news that a gang of women thieves were stealing clothing at Lululemon stores around the Bay Area, our resident palindromist Alan Wald (no fan of yoga pants) cabled us that the crime wave has spread to The 49th State: "Palindrome-loving thieves in Alaska targeted one particular branch store: Nome Lululemon."

SORRY HE MISSED "THE WISDOM OF CLOUDS"

Darn, check out a sample of what we missed at the "The Wisdom of Clouds" event at Pacifica Community Center:

And during the Q&A session, we could have learned about "The Wisdom of Pacifica Fog."

Posted at 01:29 AM in Government & Politics, Wordplay: Alandromes | Permalink | Comments (2)

Qannabis Quarry, Where the Grass Is Always Greener

Alan Wald wondered what would happen locally if Proposition 64 passed November 8, legalizing marijuana in California. (It did pass!) One possibility floated by enterprising pot farmers is to grow weed in Rockaway Quarry, assuming of course that Measure W loses at the polls (it did!) and quarry owner Paul Heule rides his eenhoorn (Dutch for unicorn) back to Michigan (stay tuned on that!).

Meanwhile, Alan says Pacifica palindrome lovers wasted no time registering "To Pacifica Pot" as the pot farm's name, when their dreams came true in the election.

Posted at 06:17 AM in Government & Politics, Wordplay: Alandromes | Permalink | Comments (0)

Pacifica.city and Big Banker both report that Gorilla Barbeque has expanded next door into the former Vintage at Heart thrift store on Highway 1. Pacifica palindrome lover Roger Wilco wishes them well: "All I, Roger, ever nosh, son -- revere Gorilla!"

On Pacific Coast TV's The Bruce Latimer Show, April 6, Pacifica Prince of Palindromes Alan Wald created two palindromes from front-page stories in the April 6 edition of the Pacifica Tribune. (Alan apparently likes to work without a net!) For the results of Alan's palindrome punchout, go to 43:10 in the video below:

Forget all the conspiracy theories about Supreme Court Justice Antonin Scalia's death. According to palindrome lovers, a crime scene investigator quotes Justice Scalia acknowledging his own ill health: "'I, Scalia, did ail' — a CSI."

"Yell a vanilla brew, O Pacifica Powerball, in a valley!" 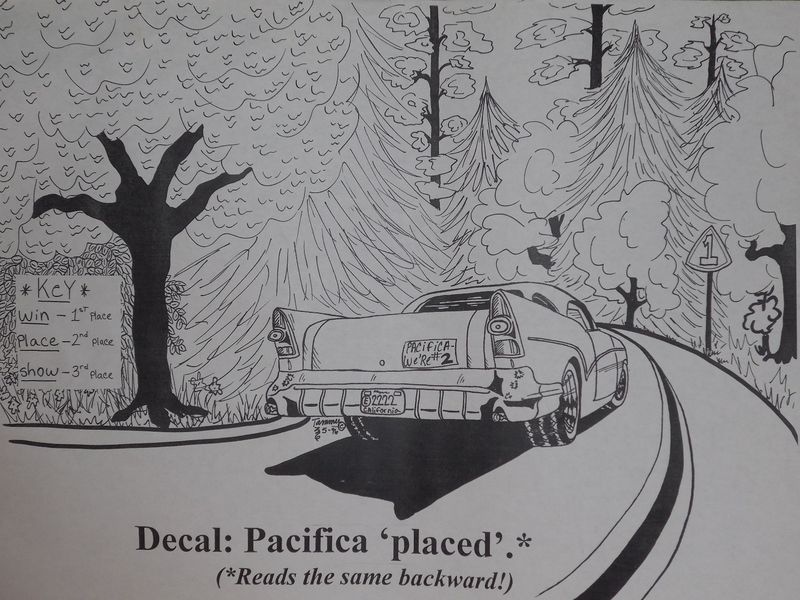 The Pacifica Tribune reports that longtime local TV host Bruce Latimer has recovered from a stroke and is back on the air at PCT 26 after several months' absence. Happily, the guy is irrepressible, or as Pacifica palindrome lovers say: "Bruce none curb!"

With Terra Nova's Wizard of Oz set to stage this weekend, several Pacifica palindrome lovers hoped to land the Wizard role so they could exclaim: "'Tis a Wiz of Oz -- I was it!"

Pi in the Sky

Woo-hoo! Trying to decide how you're going to celebrate Pacifica Pi Day (3.14) this year? Be sure to avoid the congested SFO airport and typical math holiday madness caused by too many smarties in the Bay Area. For starters, Pacifica palindrome lovers suggest we check in with Pacifica's fast new zoo director, who announced at her first staff meeting exactly one year ago that she had taken charge of the operation and immediately had ordered an increase in the number of hippos from seven to roughly 22: "I'm atop Op. Pi hippopotami!"

And who could forget the palindrome-loving chef on Pacifica PCT Channel 26, who explained as he prepared an exotic chowder (or distinctive surf-and-turf) recipe to celebrate Pi Day: "I pot cod, nag, and octopi!"

Perhaps the best news of all, Pi Day this year is two digits longer: 3.1415. So as we prepare to celebrate Pi Day, Pacifica palindrome lovers say, when offered a slice of celebration cake: "I prefer pi."