In June 1980, Pacifica City Council adopted a new General Plan, the work product of Ironsides and Associates of Oakland. This was revised, published, and adopted by Pacifica City Planner Michael Crabtree in October 1990. His revision (now 19 years old) has stood the test of time, and it’s fair to say the taxpayers got their money's worth by virtue of Crabtree’s contribution.

But City Council realizes that the existing General Plan is now out of date, and has contracted with Dyett and Bhatia of San Francisco to create a new plan at a projected cost of about $1 million. The purpose? At least two elements of the plan can use updating: seismic/safety and circulation.

This writer has learned that the new circulation element will contain language about a six-lane road between Westport Drive and Fassler Avenue. The ostensible reason for doubling the road’s carrying capacity is to facilitate the morning commute for drivers going out of town between 7. and 9 a.m. The increase in carrying capacity is to create a “segment” that allows Caltrans to connect Interstate 280 with the tunnels at Devil’s Slide. There is nothing new about this Caltrans/Pacifica approach to induce population growth on the San Mateo coast; this activity has been continuous since the Adopted Alignment first surfaced in 1958.

But Caltrans/Pacifica and other agencies face an unexpected problem in shaping their growth-inducing impact: They cannot widen Highway 1 to the west because the entire quarry is  (functionally) an environmentally sensitive habitat area (ESHA) as discussed and described by the California Coastal Commission (CCC) in its report F5a-7 2008. This means that any widening of the highway will have to be made to the east. At this point, City Council is faced with the Daly City Syndrome. Some commercial entities are at risk to be taken (used) for roadway infrastructure. The Daly City Syndrome is an aggravated sociocultural malignancy: unacceptably intense congestion and heavy traffic (below). 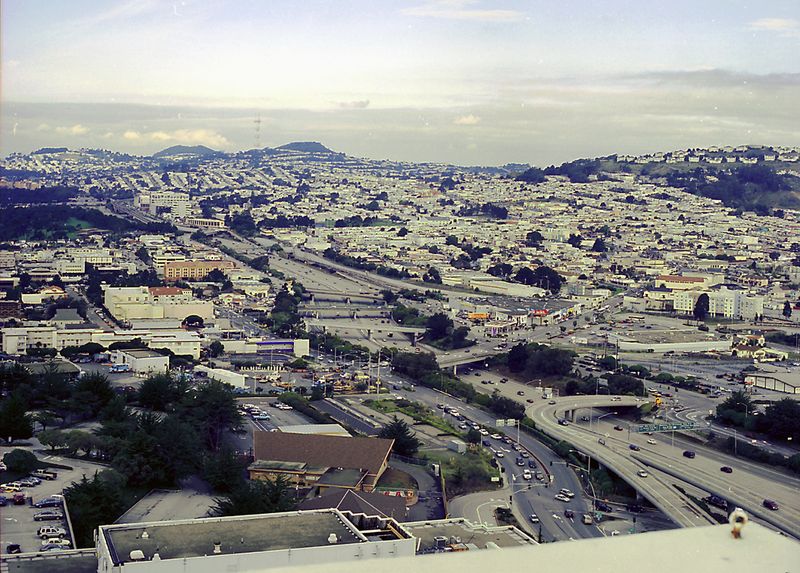 The Daly City syndrome has “infected” the northern area of Pacifica in a small but important way since Pacifica was incorporated in 1956. But the “infection” is spreading southward, and Highway 1 (and its carrying capacity) is the vector. Highway widening from Westport to Fassler would produce a significant, unacceptable growth-inducing impact on Pacifica’s hillsides, if recent history is any indicator.

The public would do well to recognize that the city’s Planning Commission and City Council approved two site development permits (“Prospects” and “Harmony”) on hillsides north and south of Fassler. It appears that  the skids are greased.

Developers of both those developments were required to produce Environmental Impact Reports (EIRs), which they did. The Planning Commission and City Council approved both EIRs though it was widely known (for more than 20 years) that the circulation level of service (LOS) was “F” at Fassler and Highway 1 and also at Reina Del Mar and Highway 1. So far, the two approved developments have not been constructed for a variety of reasons beyond the scope of this article.

But if Caltrans and its cohorts succeed in connecting Westport with the tunnels, the effect could be a functional connection to I-280. Of course, Caltrans et al. would have to face the question of a legal right-of-way in the unincorporated area between the Pacifica city limits and the tunnels.

Coastal Act Section 30254 requires that Highway 1 remain a two-lane road in unincorporated areas. This has not prevented Caltrans and the San Mateo County Board of Supervisors from attempting to circumvent strictures in the Coastal Act in the past. The record will demonstrate that they thumbed their noses at the Coastal Act when they attempted to construct a freeway from Pacifica’s southern city limits through the mountain at McNee Ranch State Park. In doing so, they advanced the concept of “taking” the existing two-lane road in the unincorporated area to build a 105-foot-wide freeway through a state park! This was called the “Martini Creek Alignment.” It established new precedents for bureaucratic arrogance and deception that the public can live without. The end result of their defeat in Judge Peckham’s court is manifest in the two 30-foot-wide tunnels now under construction through the landform behind Devil’s Slide.

The two tunnels have the carrying capacity of the four-lane roadway that the power structure has been striving for over the past 50 years. They are the likely precursors of a widened Highway 1 on a two-lane road in the unincorporated area. This is prohibited by the Coastal Act, but that does not seem to impress Caltrans or other elected/appointed bodies from bringing the new Daly City to the San Mateo coast.

The real way to ease the morning commute on Highway 1 is to avoid any widening between Westport and Fassler, and look for simpler remedies that could be inexpensively implemented. That is now our most important task.

In the face of known facts, it’s obvious that  the planned/proposed widening/“segmentation” of Highway 1 is unacceptable and antithetical to the public interest. Clearly, it will be an avoidable malignant circulation vector that may be referred to as an “equestrian alignment” because it’s an obvious Trojan Horse.

(Editor's Note: Bob Pilgrim has been involved in local conservation/preservation efforts for many years in Pacifica, both as a member of Pacificans for Sustainable Development and the Sierra Club's Loma Prieta Chapter for the Peninsula. To reply to this article, scroll down and click COMMENTS.)